I have a unique relationship with the expression, “Life is a marathon, not a sprint.” In college, I was a 200 meter sprinter. Speedy races were my favorite! And as of last year, I also became a marathoner. Then, on Sunday, November 4th, 2018, I ran the TCS New York City Marathon with 52,696 other athletes for the second time. My second attempt at this distance on this particular course humbled me in many ways I didn’t expect. Here’s that story. 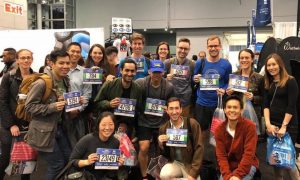 Getting our bibs at the NYCM expo!

The training process: anything but glamorous

During the process, I harbored a lot of doubt and realized that this isn’t a distance I personally enjoy training for. But I committed to this in February so I was in no position to back down. I never felt the same sense of excitement that I did in the first round because chasing a time goal was really terrifying. I’m fortunate to not question finishing the distance. But that means I have to take risks to reach my desired outcome.

New York City had a lot of days with oppressive humidity and torrential rain. I don’t recall the weather from last year’s training cycle to be as brutal. On top of that, I ran mostly on tired legs, which actually helped me on race day, but did nothing for my confidence at the time. Getting through my easy 2-mile warmups was a struggle. I’m fortunate to have incredible training partners from the Dashing Whippets, who held me accountable from day one and helped me get through the process. 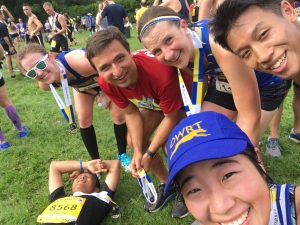 In October, I traveled to Boston to close out my BAA Distance Medley series with the half marathon. I knew that I’d be nowhere near a personal best, especially on a course that was touted to be full of hills but I wanted at best, a 1:50 and at worst, 1:55. Luckily, I had a great teammate who stuck with me the whole time but I was nearly crushed by the backend hills and finished in 1:58:22. Disappointment was an understatement and seriously questioned my ability to race an impressive NYC Marathon. (To be fair, that was a really fun trip though! The race was awful but it was a great experience otherwise.)

Race day was finally here and it was a mix of emotions – excited that I made it to the start but anxious about hitting my target time. I think of myself as being a rigid racer, one that requires certain circumstances to work in my favor to perform well. It had rained the day before and left behind a lot of humidity. In addition, it was forecasted to go into the high 50’s, which is personally too hot to race a marathon. I practiced everything during training but things can still go wrong and I wasn’t sure my backup plans would suffice.

The energy of the first half was unreal! Going through Brooklyn was wild. Many people were cheering on runners and every stretch featured various types of music and entertainment. The first Whippets fluid station was coming up at Mile 10 and I focused on getting there at a steady pace. I had no trouble holding back the pace and clocked in at the halfway point at a little over two hours. I was right on target to hit my goal and ready to start attacking the second part of the race with aggressive negative splits. 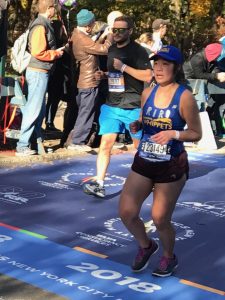 Queens was up next and it was quite the surprise to see nearly all the iconic NYC running clubs cheering and supporting the race. I loved absorbing the energy, which took me up the tough Queensborough Bridge. It’s one of the few points of the race without cheer, but it helped me evaluate where I was physically and mentally. I reset my strategy and headed into Manhattan. I picked up the pace slightly and cruised up First Avenue. The crowds were crazy – it was the true epitome of a “block party”!

As I headed into the Bronx, I knew that the warrior athlete in me needed to come out. The final 10K of the marathon is where the race “starts” and I was ready to go into battle. Unfortunately, it was much tougher than anticipated. The temperatures were past the threshold of comfortable race conditions so I drank more water than usual. This caused major stomach issues and a trip down the pain cave. But knowing that the second major Whippet cheer zone would be at Mile 21, I fought hard to get there. My vision was starting to blur but I saw a massive sea of blue and gold, which uplifted my spirits. 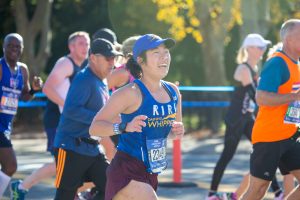 Descending back into Manhattan on to Fifth Avenue was rough. The pain was getting unbearable and I started to fade badly. I felt the sub-4 slip out of sight. Even if I took a mile or two to slow down and reset, I would need an impressive final 5K to make it and I wasn’t sure I had that in me. It was getting progressively hotter and I was losing focus. I saw the welcome sign to bonk nation right in front of me and slipping into that territory was extremely tempting. At one point, I thought, “If sub-4 isn’t in the cards today, what’s the point?”

I ditched that goal but I was going to battle it out anyway. I’ve made too many sacrifices to give up. The final two miles were gruesome but I was uplifted by Whippet friends in Central Park. I caught a glimpse of the finish line so I channeled my inner track athlete and started sprinting with all final bit of energy I had. I shoved my way between a pair of people who blocked my path by holding hands (because who runs outside tangents at the last 10 meters of a race!?). 4 hours, 3 minutes and 56 seconds later, I crossed the finish line.

The 27th mile: everything after the finish

I could be sour that I didn’t hit my goal but I wasn’t. In fact, I was extremely proud of digging myself out of that hole, which could have easily led to a full-on bonk. I may have let sub-4 slip out of sight but I wasn’t about to let regret take over. There are many things about the NYC Marathon that make it easy to be disappointed. It is a challenging course and presented less-than-ideal weather circumstances. Despite that, I embraced the pain to a strong finish and made it there injury free with the best teammates in the world. I can’t ask for more than that. 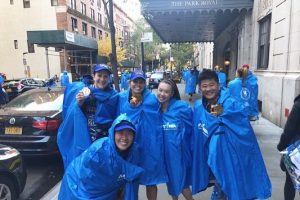 At the beginning, I was much more excited about racing the short stuff like the 5K and mile. Racing the NYRR summer track series flooded me with nostalgia for my Track & Field days of college and got me eager to sprint again. But now, as I reflect on this process, I’m glad that I did it because I learned how much stronger I am when things get rough and that I am capable of digging myself out of the seemingly impossible. I’m still not convinced that the marathon distance is one I enjoy racing but who knows what I’ll feel down the line.

5 things I got right:

Reflecting back on my recap from last year’s marathon, I see a lot of similarities in what I’d improve from then to this time around. I made a few tweaks in each category but I certainly have my work cut out to fully commit to these items. The Boston Qualifier times got faster by 5 minutes so I need to be diligent about putting in work to keep closing that gap.

When I trained for the NYC Marathon last year, I put a lot of other items in my life in the back burner because I wanted to focus on having a solid debut race. The downside is that my aspirations to make a full career transition suffered. This year, I was determined to do it all and not make compromises. I hustled to find a new job in UX. During peak week, I was actively talking to eight companies while running crazy mileage! And finally, three days before the marathon, I accepted a role as a UX Writer for American Express!

For the time being, I’m excited to close out this successful season with a new job in hand, a shiny PR of 17 minutes, and a future as a short distance specialist. My next marathon will be the Tokyo Marathon in March 2020, which lands on my birthday and who doesn’t want to run a 26.2 World Major race to celebrate good health? Until then, I’m excited to focus on building a solid speed base and doing a lot more strength training. Eventually, I’d like to attack the 26.2 mile distance on various other courses and I might develop a love for racing the marathon.

Finally, after completing my second marathon, how do I feel about, “Life is a marathon, not a sprint”? I agree – to an extent. Life is the training, whether that would be a marathon or a sprint. I wouldn’t diminish the efforts of a sprinter because training for either distance is a “marathon” in itself. Life isn’t the race itself, or at least in isolation. Life is the adverse and beautiful process – with all the non-linear, highs and lows (shorts hems included), chafed up skin with mosquito bites, salty sweat, blisters, black toe nails, included.