This past weekend, I wrapped up my winter racing season with the NYRR Washington Heights Salsa, Blues, and Shamrocks 5K on Sunday, March 5th. I want to have an honest discussion on what it has been like to train during the winter. I knew that as I worked up to the upcoming United Airlines NYC Half 2017 and the TCS New York City Marathon, I couldn’t sit idly and let the dreadful winter days pass by. That also meant I needed to overcome my fears of running in the cold.

The last time I wrote about running, I had just completed the Joe Kleinerman 10K 2017 on Saturday, January 7th in 22-degree weather and shared my goals for the year. Since then, I’ve also completed the NYRR Gridiron 4M/Longest Football Throw on Sunday, February 5th (Super Bowl Sunday!), the NYRR Al Gordon Brooklyn 4M on Saturday, February 25th (right before a hackathon) and finally, wrapped up with the NYRR Washington Heights Salsa, Blues, and Shamrocks 5K last weekend on Sunday, March 5th. Did I mention the last one was in 16-degree weather?

It’s already a struggle to wake up early on the weekends to race. But I didn’t think I could handle it with the added challenge of racing in low temperatures. I signed up for these races in October when it was considerably warm so the reality of racing in cold temperatures didn’t really set in until later. Plus, New York Road Runners (NYRR) does not provide refunds so I was pretty much locked into commitment. Great job, self.

When I started this whole thing, I ran my first race in June of 2016 with the NYRR Retro 4-Miler in ideal weather conditions. Training during the summer and fall was exhausting but I loved it. There’s something freeing about running in a t-shirt and shorts in the blazing sun. Occasionally, it rained but I never encountered a massive training obstacle. But when November hit and the temperatures dropped, I seriously considered hibernating because I did not want to train in the cold. I was afraid of the cold.

Naturally, as a UX designer, I thought about how I could approach this obstacle as an opportunity. I might have been afraid of the cold but I love running so I desperately wanted to make it work. I asked myself what prevents me from genuinely enjoying the process of running in the winter. What are my key pain points? Figuring that out was difficult because each reason I listed made me more discouraged.

So, first things first. Going into the winter season, I only had two pairs of thermal running leggings and maybe three long sleeves. And on days when it was below freezing, I would wear them at once to avoid numbing up. If that doesn’t indicate my dislike for running in the winter, I don’t know what will. But clearly, I didn’t have enough apparel so I stocked up on winter running gear and solved that problem.

But who am I kidding? Let’s get down to the real talk.

Ultimately, it came down to the fact that for every workout I missed and every mile I didn’t run, I got weaker. Last October, I fell into a major training slump after completing the NYRR Staten Island Half 2016. I don’t know why I stopped working out but for three weeks, I didn’t do anything. Not even squats. Perhaps I was severely scarred from the experience of running my first half marathon in insane weather conditions but for a brief time frame, I lost my momentum and confidence as an athlete.

It hit me hard when I showed up to the Poland Spring Marathon Kickoff (5M) 2016 race and performed the worst. Up until that point, I conquered every single race and managed to bring down my time. But at the one race that I’m supposed to qualify for the marathon, however, I messed up and found myself at square one. I wish I could blame someone else but I have to take full responsibility for my actions (or lack, thereof). Everything I trained for in six months was shattered in three weeks.

So winter or not, I had to get back into it. I started running four days a week again. I added cardio kickboxing and crossfit classes for my off days. I created a Strava profile to keep track of my fitness activities. I talked about it to others and made sure that my running buddies kept me accountable. Every single workout was a physical and mental battle with my excuses and weaknesses. But persisting through the challenges made me stronger and eventually, running in the cold felt like nothing. 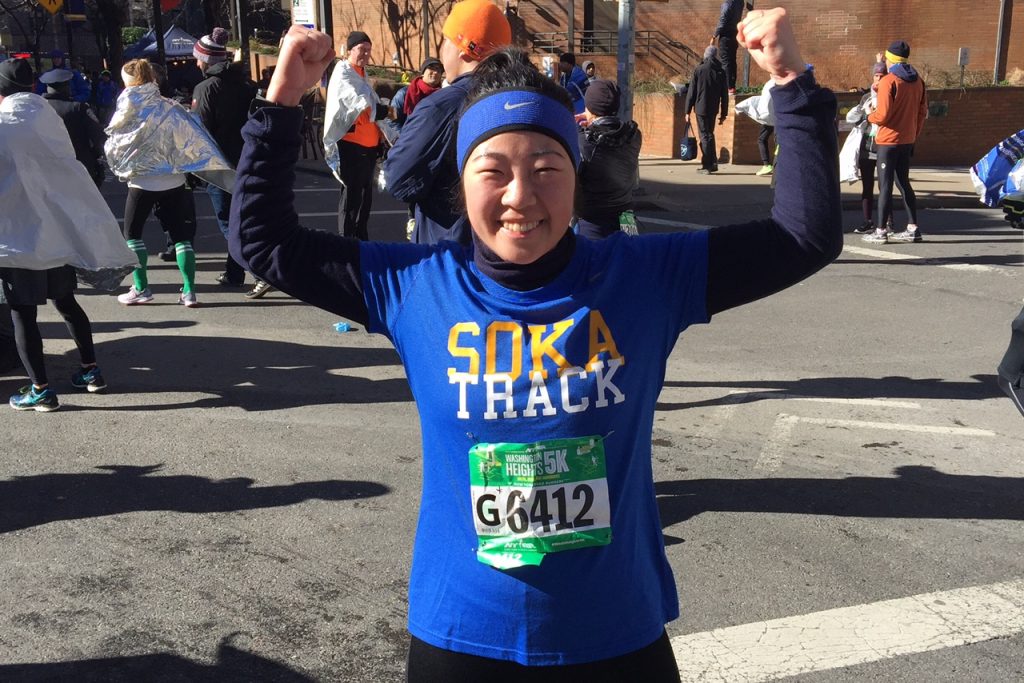 In Buddhism, we often say that “winter always turns to spring” as a metaphor to express that any struggle can be overcome. Battling through my fears of running in the cold is the most “winterish” struggle that I’ve experienced. And the added challenge of regaining my confidence as an athlete made overcoming it significantly harder. But I got through my winter training and came out of my races with a new PR (personal record). I’ve even moved down two corrals as a NYRR racer. That’s huge!

Now, I can say with sincerity that I love running in the cold. It hasn’t been easy to get here but I’m happy that training in the winter is no longer a struggle. It’s still a challenge but it’s something I appreciate. For all my runner friends who are hibernating because “it’s too cold to run outside,” you have a lot of catching up to do. See you at the finish line.