Last Sunday on October 9th, I trekked out to Staten Island to run my first half marathon. The NYRR Staten Island Half 2016 was under the worst possible conditions but I conquered it! If you ask me, it was borderline dangerous and the race should have been canceled but I’m still glad I ran it. Considering that this is my first half, I’m proud of finishing strong under such circumstances. It sure is a great memory and is a story that I’ll tell for years to come. This race is number eight so I have one more until I’m qualified for next year’s TCS New York City Marathon. Brace yourself for some of my takeaways from this brutal race. 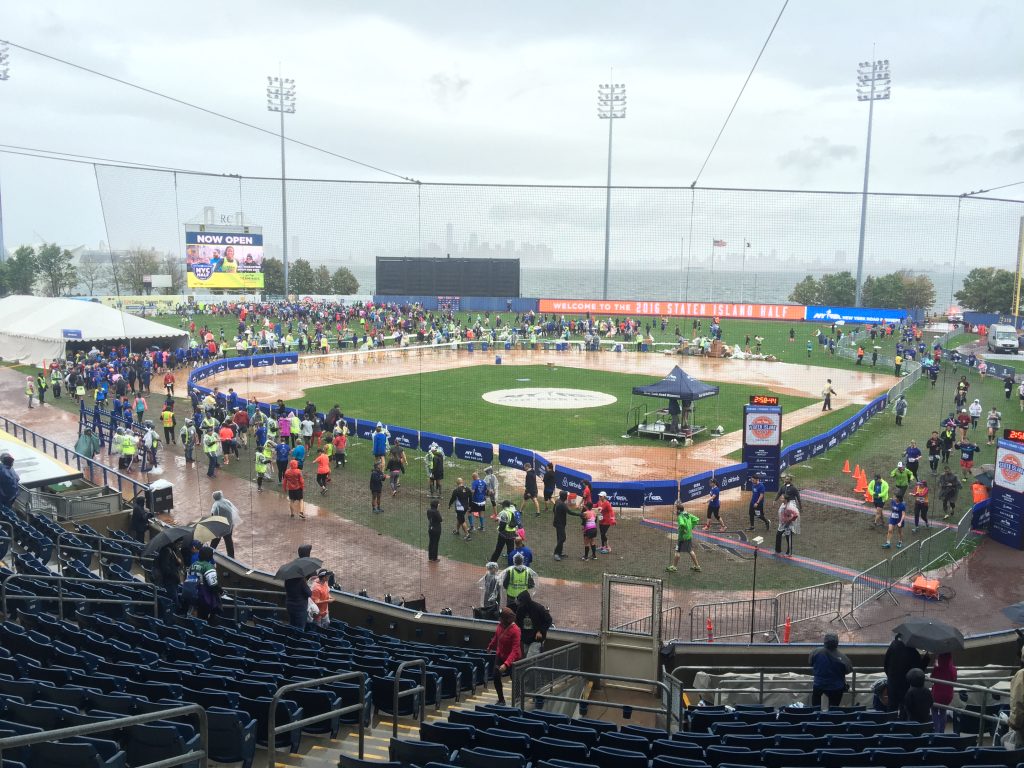 1. Finishing through insane obstacles
As soon as I finished, I checked social media to make sure I wasn’t a little bitch and the conditions were really that bad. Running 13.1 miles is tough as it is but let’s also include long hills, hurricane winds, sharp rain, cold air and muddy puddles (and cramps!). On top of all that, there were significantly less people cheering compared to races in Central Park. By mile three, I was straight up freezing and no amount of running could warm up my body. I was an idiot for not wearing more layers but I probably would have suffered in a down jacket anyway. My arms were painfully numb because of the cold and I stuck them in between some awkward places to find warmth. It was brutal. But the most important thing is that I finished.

2. Not allowed to walk
My rule is that when I race, I’m not allowed to walk. That’s not difficult when the distance is under five miles. But a half marathon? We’re talking about more than two hours of constant physical activity. When I’m feeling close to defeated, I always think back to my cross country coach from college who was extremely strict about not walking during races. There were countless moments when walking would have been easier but that would add more time until I could bundle up in warm clothes. I had no choice but to push through. I ran the entire thing. I would hate to be asked how much of it I walked because I’m all about telling others with pride that I don’t walk races. And guess what? After 13.1 miles, I still sprinted through the end. 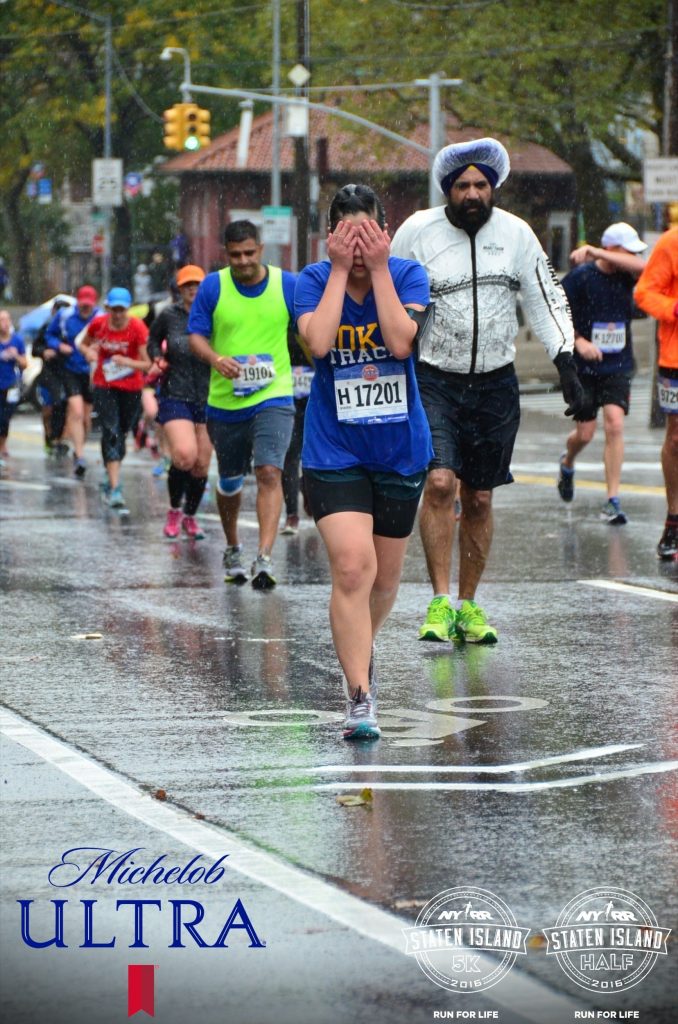 an accurate depiction of how I felt.

3. Alone with my thoughts
People asked how I entertained myself throughout the race. I don’t listen to music so it’s just me and my thoughts. Longer races are great for introspection. I’m an introvert so I really love being alone with my thoughts and having inner dialogues about life. But you’re probably wondering what goes on in my head when things get really rough, aren’t you? I turn into the Hulk. I fill my existence with anger. I dig up all the bad memories of my past that I’ve pretended to have forgiven. I think about the ways I’ve been disrespected. I mentally curse out everyone I hate. I don’t like that I’m not able to let go of these memories and keep holding onto grudges but it fuels my running tank. It got me through this ridiculous half marathon. That’s enough for me.

4. Crazy is the new normal
People think I’m crazy as it is. When I told people that I’ll be running a half marathon in Staten Island, however, they thought I lost it completely. Trust me, I lost my sanity long ago. Their follow up question was, “How early are you going to wake up?” My answer was, “Oh, sometime around four in the morning. No big deal.” I had to catch the 6:30am ferry, what did you expect? Waking up at 6:00am for my Central Park races is what I consider sleeping in. As a runner, I lose track of what seems crazy to others because everything I do to run is considered normal. It’s not easy but I’ve accepted it. And I kind of love the exclusive club of crazy runners that I’m a part of. Even after this race, I don’t hate running so I’ll keep being crazy and keep on running. 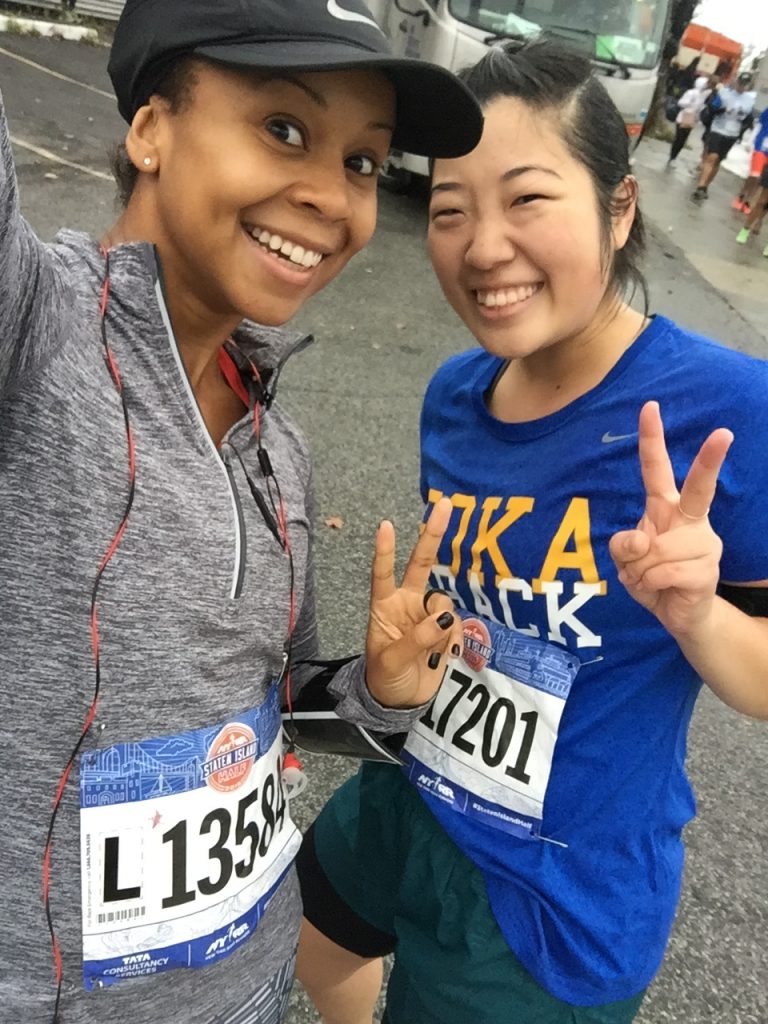 Soka sisters in the house!

5. Ready when you’re least ready
I registered for this in early September because Kimberley, my Soka sister and fellow Nichiren Buddhist, encouraged me. I have a big ego so I don’t say no to a running challenge. The thought of running more than five miles terrified me because I convinced myself that I’m not ready. I’m disappointed in dismissing that thought myself but am appreciative that someone else saw my potential. I also convinced another Nichiren Buddhist lioness, Bethany, to join me on this crazy challenge and the three of us tore that race apart! I learned that we are ready for challenges when we believe we are the least ready. I’m glad I did this but now, I really need to evaluate other areas in my life where I haven’t started something because I’m not ready yet. 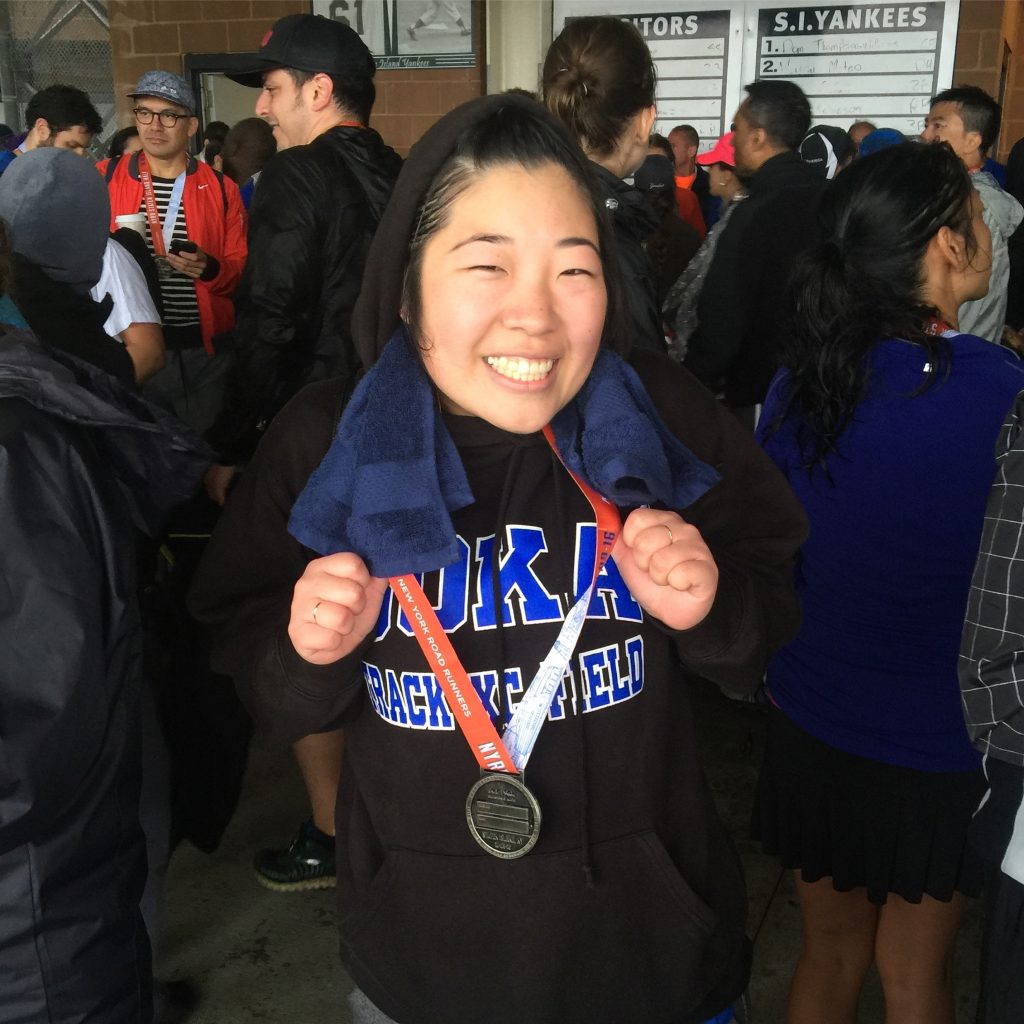 Here is a special shoutout to the people who volunteered at this race. You are the true heroes of that day. Despite the circumstances, you powered through and I sincerely thank you for that. I was also surprised and delighted to see an old high school friend, Wendy, towards the end of the race. Her energetic cheer was exactly what I needed to finish strong. How she recognized my destroyed face is still a mystery but I’m glad she was there. As soon as I got home, I took a long hot shower. And once that was done, it was time for coffee and foam rolling. For a few days, I was extremely sore and got tired easily. Fortunately, I didn’t get sick.

My next and last race of this 9+1 journey is the Poland Spring Marathon Kickoff (5M) 2016 on Sunday, October 30th. When I started 9+1 five months ago, I never imagined completing a half marathon this year. At the earliest, I anticipated running one sometime in the spring of 2017. However, this was a great way to challenge every limitation that I’ve placed on myself and prove that I’m capable of significantly more than I think I am. Would you believe me if I told you that five months ago, I could barely run fifteen minutes without collapsing? Look at me now. I ran a half marathon in two hours and thirteen minutes in the worst circumstances and managed to get myself home. Now, that’s what I call a champion.